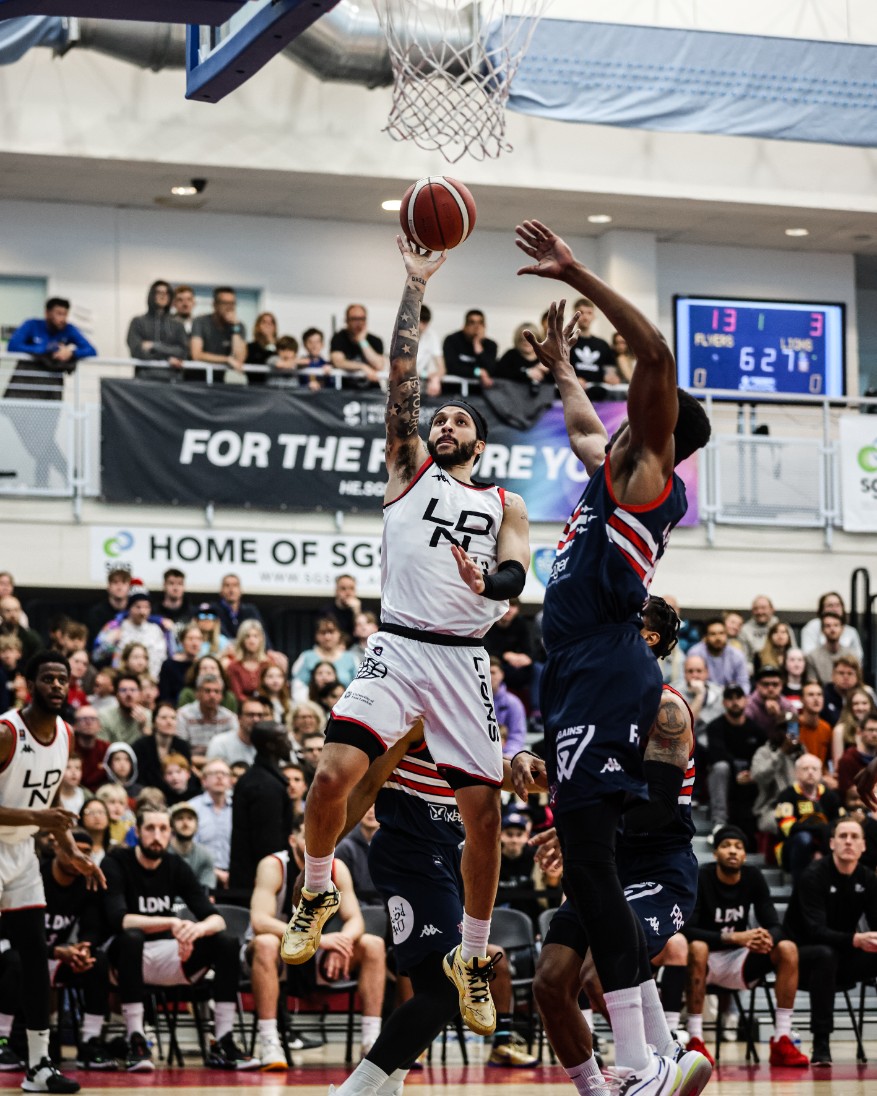 London Lions will play in the final game of the British basketball season as they overcame Bristol Flyers 91-73 on Sunday evening to reach the BBL Play-off final.

Lions will face either Leicester Riders or Glasgow Rocks at the O2 on Sunday following their 176-156 aggregate victory in front of a big Copper Box crowd.

Nikhil Lawry’s side did most of the damage in the fourth period, outscoring the visitors 31-18 after an enthralling first three quarters.

Isaiah Reese hit five triples on his way to a 28 point night, with 16 of them coming in a tight first half. He added eight rebounds, as many assists and six steals in another fine performance.

Dirk Williams showed he is truly back from injury as he hit six three pointers in his 26 points, adding five boards, three assists and a couple of steals. Kylor Kelley came off the bench to finish with 14 points, seven rebounds and three blocks while the Julian Washburn block-party continued with six swats, seven rebounds and 13 points

Bristol were led by 19 points and seven rebounds from Trejon Jacob while Mike Miller had a 15-point, 13 rebound double-double for the visitors.

Cugini scored off the window to tie the game at 12 midway through the period before Kelley’s dunk off Williams’ assist gave the hosts their first lead of the night. Another Kelley dunk got the crowd on its feet as Lions took a 20-17 lead

Ryan Martin’s triple kept Lions ahead as they went into the first break 23-22 ahead and Martin extended the lead with two=-from-three free-throws after being fouled by former Lion Shane Walker to open the second period.

Miller hit a three to cap a 7-0 run, forcing a timeout from Lawry with his side trailing 29-25 with 7:45 on the clock. Washburn scored a baseline lay-up to end the run and Williams’ triple put the hosts back up by a point.

Reese sliced through the visitors’ defence to put Lions 34-29 ahead at the 5:50 mark to force Bristol coach Andrea Kapoulas into a timeout. His team responded with an 8-0 run to go ahead on aggregate before Kelley slammed the ball home and Washburn hit a triple to tie the game at 39 with 2:19 on the clock.

Two Reese steals saw him hit a lay-up and then a triple, only to receive a technical foul for celebration – though the ball didn’t lie, and Evans missed the free-throw

Jacob hit a triple with 20 seconds left on the clock to make It 44-42 and after Lawry’s timeout Reese ran the clock down before hitting a sweet lay-up to give Lions a four point lead on the night and six on aggregate.

Washburn’s floater opened the second half scoring before Miller replied at the other end as both sides struggled to keep the scoreboard ticking over. A Reese and-one took the aggregate lead to nine with four minutes gone before Jacob drained a triple to keep his side in touch.

After Flyers had narrowed the gap to 51-49 Williams drained a pair of triples to put Lions up by ten on aggregate with 4:10 remaining in the third period to force a Bristol timeout.

Washburn added another score from downtown but Bristol stayed in touch, and Lawry called a timeout with his side 60-56 ahead on the night and 1:41 on the clock  but neither side were able to trouble the scorer in the rest of the period as Lions took a seven point aggregate lead into the fourth quarter .

Thomas-Edwards hit a pair at the foul line to open the fourth period before Williams hit a triple off Reese’s assist.

Reese then stole the ball and drained from downtown to put his side 66-57 ahead on the night and force Kapoulas into a timeout with 62 seconds gone.

But Reese was on fire, hitting another trey to give his side a double-digit lead on the night before Kelley jammed the ball with force to make it 71-59

Reese’s step-back three made it a 15-point game and Williams’ fastbreak dunk followed by a trey had the Box rocking as the lead grew to 18.

There was no way back for the Flyers with Kelley making it a 20-point game with four minutes left before Williams drained from downtown and hit a long two before Lawry ran his bench for the final two minutes.